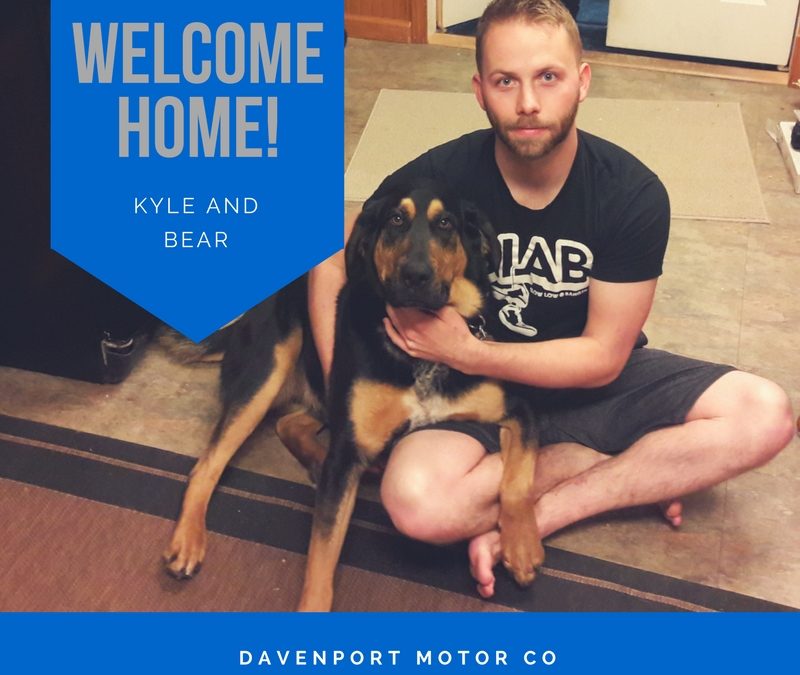 After a year’s deployment to Kuwait and Afghanistan—his first deployment as a member of the Texas Army National Guard—Kyle Pennington has returned to work at Davenport Motor Company in the Plano location.

Kyle’s talent for and interest in all things mechanical led to an Army assignment as a helicopter technician, working on Boeing CH47s, also known as Chinook helicopters. He was somewhat surprised to find himself the informal leader of his fellow technicians, some of whom had never worked with tools before. He developed forced patience as he learned how one small adjustment on a helicopter could sometimes take an entire day for the team to accomplish. And he learned not to touch the top of a “bird” when the temperature on the tarmac reached 145 degrees—that lesson didn’t take but once to learn!

Returning home, Kyle went to Florida to visit family. And along the way, he found the best “welcome home” present ever: a new companion named Bear. Bear wandered up to a bonfire Kyle was enjoying with a fellow soldier who lives in Alabama. Turns out the nearby crossroads in the country is a favorite drop off point for abandoned pets.

Abandoned no more, Bear the coonhound now shares Kyle’s life as a fellow sojourner. And we’re glad they are back.